Newly uncovered documents obtained through Freedom of Information requests reveal the cozy relationship between the fossil fuel industry and the last BC government went even further than suspected — all the way to inviting industry to directly craft the province’s climate “leadership” plan.

Let’s rewind for a second: back in the spring of 2015, then-premier Christy Clark announced the provincial government would create a new climate plan.

A 17-member climate leadership team was appointed and tasked with developing recommendations to meet BC’s greenhouse gas reduction targets. The government released the team’s recommendations in the fall of 2015 — allowing then-Premier Christy Clark to head off to Paris for the December 2015 UN climate talks cloaked in the mantle of climate “leadership,” after four years of near-total inaction by her government.

That’s where things got interesting.

Documents obtained via Freedom of Information legislation, available here, indicate that while the Paris talks were underway, the government launched a closed-door three month-long process to work jointly with the oil and gas industry to revise and re-write the climate leadership team recommendations.

The process entailed five rounds of meetings over three months with all the key corporate players, from oil and gas producers to distributors. It was divided into working groups on the carbon tax; methane and fugitive emissions (ie, from natural gas production, a significant source of BC’s greenhouse emissions); and electrification (ie, the provision of cheap electricity to natural gas extraction sites and LNG plants in order to make gas production less GHG-intensive).

Notably, most of these BC government-organized meetings took place not in BC, but in Calgary — specifically in the boardroom of the most powerful fossil fuel lobby group in the country, the Canadian Association of Petroleum Producers (CAPP).

The documents include a power point deck dated January 2016 that outlines the process for the “Climate Leadership Team Recommendations – Consultation with Oil and Gas Industry.” The document is from the Ministry of Natural Gas Development, which led the “consultation”— not the Climate Action Secretariat, which coordinated the Climate Leadership Team (and, as far as the public knew, was the lead government agency working on the plan). The documents released also include agendas from one round of working group meetings on January 13, 2016, along with the attendee lists for those meetings. 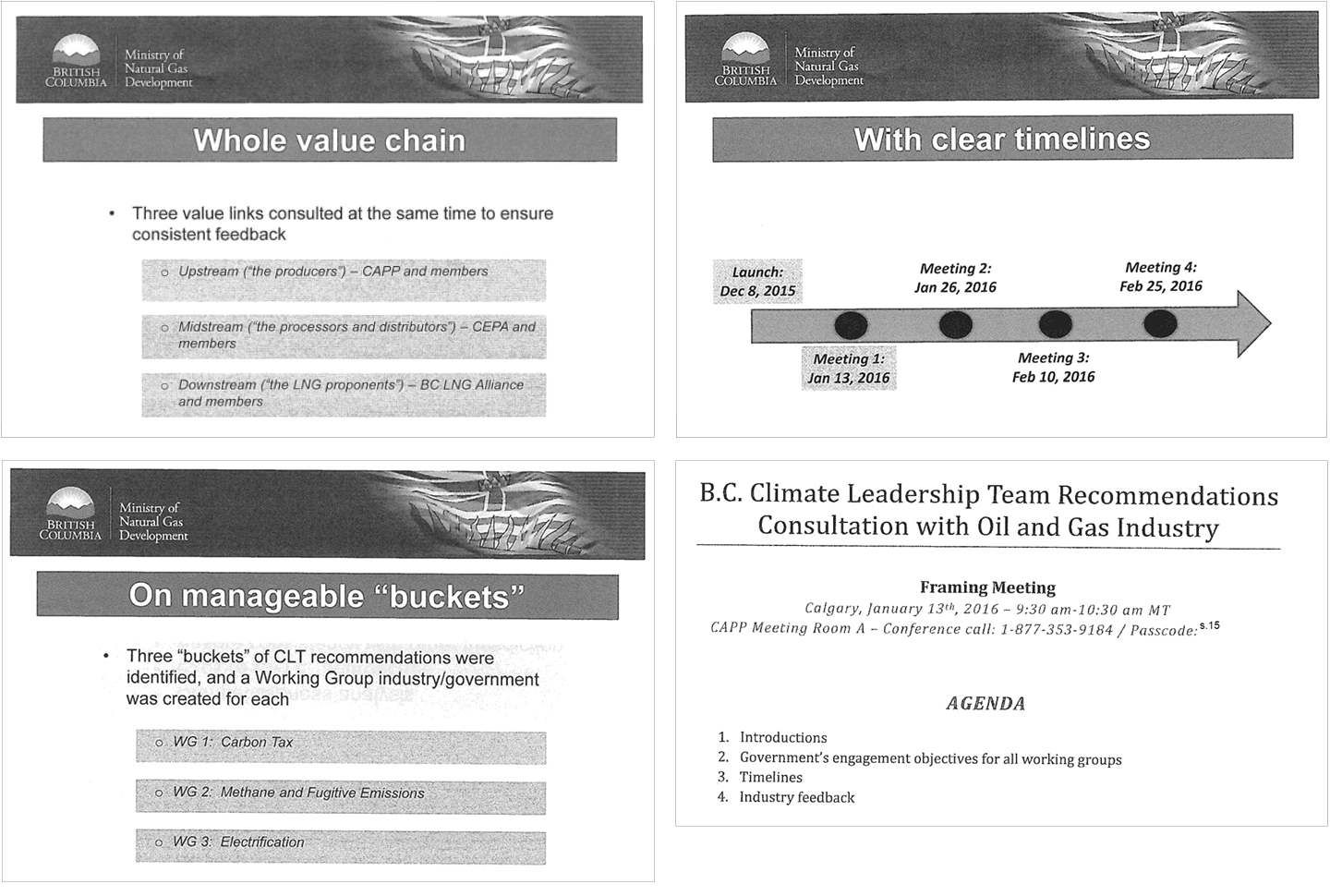 These lists show that senior officials from the Ministry of Natural Gas Development, the Climate Action Secretariat and BC Hydro attended the January 13 meetings in person. We do not yet have access to the daily calendars for several other senior officials who we believe may also have been present.

Recall that when the climate leadership plan was released in the summer of 2016 it largely ignored the leadership team’s 32 recommendations, in what was dubbed by some as a “climate non-plan.”

Most troubling of all is that this was much more than a “consultation” process. The documents obtained make it clear that in fact the process constituted an invitation to the country’s most powerful oil and gas companies to shape both the substance and language of BC’s next climate plan. For example, the working groups on methane emissions and electrification were each asked to “refine language in CLT recommendation” and to “add detail and process direction” regarding timing and whether policy measures would be voluntary or regulatory. The working group on the carbon tax was asked to “ensure consistency with other jurisdictions” and to “determine ‘the art of the possible’ (how much and how fast).” The working groups were asked to come together to “work on offsets.” The timeline for the working groups also include the action item “finalize language” for the “CLP Framework” (ie, Climate Leadership Plan Framework). 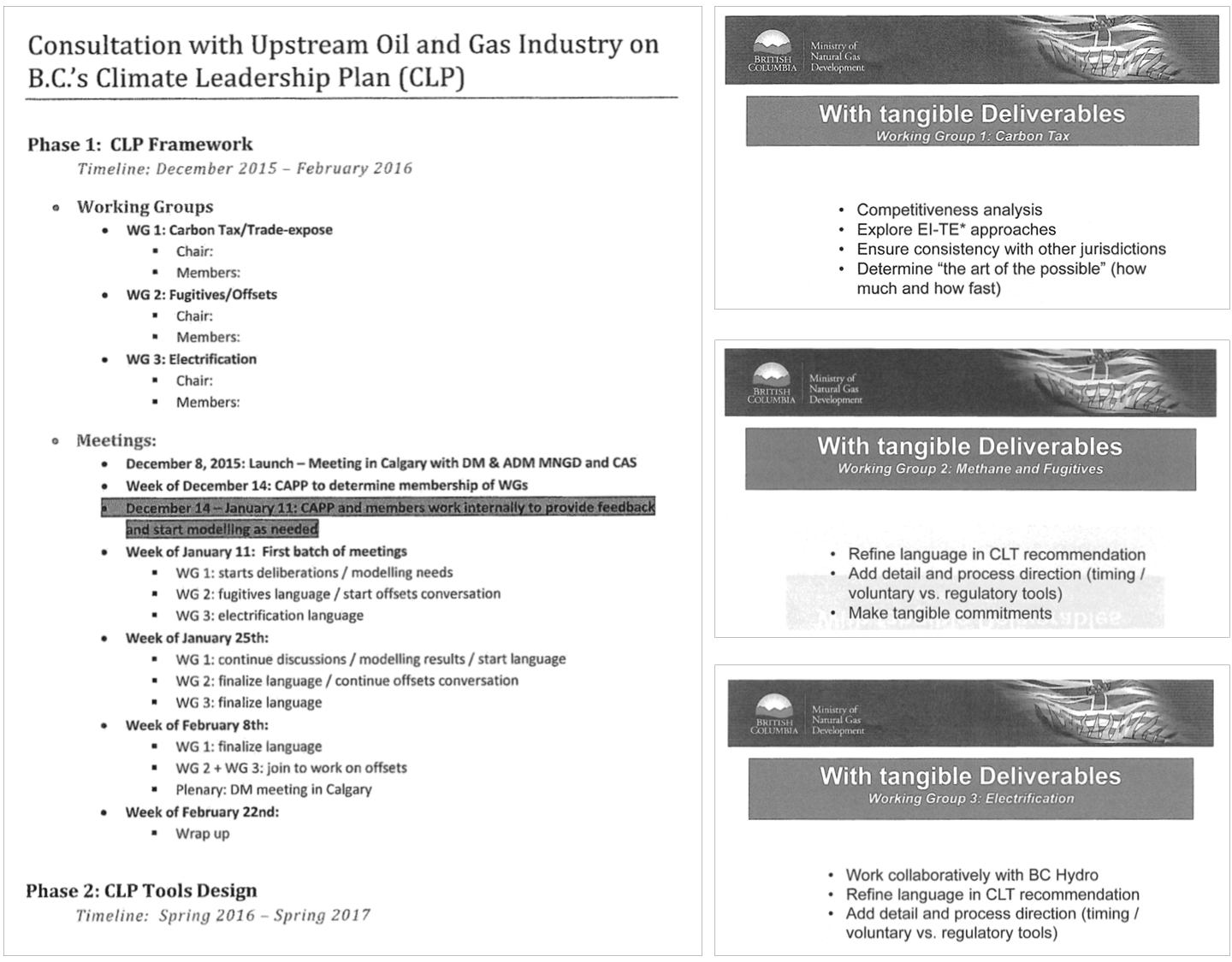 Our FOI request asked for minutes and/or summaries of the meetings and industry consultation process, but none were released to us. Pages 19 to 38 of the relevant records were withheld on the grounds they constitute advice or recommendations to a public body or minister (S. 13) and/or that they would be harmful to the business interests of a third party (S. 21). Perhaps these missing pages are the minutes and summaries. Or perhaps they are something else. We have asked the Information and Privacy Commissioner to review the government’s decision to withhold these records.

It should be noted that it took two FOI attempts to even receive this much information. In July 2016, we submitted identical requests to the Ministry of Environment/Climate Action Secretariat and the Ministry of Natural Gas Development for documents relating to any meetings or other communication between the fossil fuel industry and senior officials in relation to a wide range of energy and climate policy matters starting in January 2016.

The Ministry of Natural Gas Development withheld all documents having to do with the industry engagement process and Calgary meetings. The Ministry of Environment released the agendas for the January 13 working group meetings (just the agendas, no other contextual information). It was only through a follow-up request to the Ministry of Natural Gas Development (now part of the Ministry of Energy, Mines and Petroleum Resources) that we obtained the full set of documents reviewed here. These should all have been released in response to our initial request, along with material from the other rounds of working group meetings (and who knows what else).

A stunning example of institutional corruption

In sum, the BC government carried out secret meetings in another province with an industry that is a top contributor to the BC Liberal Party to shape policy that ought to constrain that very industry — as any meaningful climate policy must do in relation to the fossil fuel sector.

Ironically, none of these meetings “count” as lobbying under BC’s current Lobbyist Registration Act, which doesn’t require meetings or communication invited by public officials to be reported by lobbyists. Meanwhile, no other sector — environmental organizations, First Nations, etc — could even dream of this kind of access.

This is more than a case of ideological alignment between a corporate-friendly party and its corporate donors. It is a profound blurring of the lines between government and industry, who set out to make policy together behind closed doors — while what can only now be characterized as a pretend consultation process was acted out publicly.

This blurring of the lines is an example of what ethicists refer to as “institutional corruption:” a “systemic and strategic influence that undermines the institution’s effectiveness by diverting it from its purpose or weakening its ability to achieve its purpose, including…weakening either the public’s trust in that institution or the institution’s inherent trustworthiness.”[1]

The whole charade also represents an abuse of the climate leadership team’s time and a mockery of BC’s claims to leadership during the Paris climate talks, not to mention a tremendous waste of public resources. How much did the province spend on the climate leadership team process — convening the 17-member team for meetings, carrying out extensive climate modeling to support their deliberations (services that were contracted from the private firm Navius, no doubt at significant expense) and public consultation activities? How many thousands of hours of staff time were spent by ministry personnel to support it all?

BC’s new government has committed to more ambitious climate policies than what the previous Liberal government outlined in its non-plan last year. But with the fossil fuel industry accustomed to guarding the hen house — putting pen to paper on climate policy and regulation — a great deal of political will is required to move forward. And that ban on corporate donations to political parties? It can’t come soon enough.

This article is published as part of the Corporate Mapping Project, a research and public engagement initiative investigating the power of the fossil fuel industry. The CMP is jointly led by the University of Victoria, the Canadian Centre for Policy Alternatives’ BC and Saskatchewan offices, and the Parkland Institute. In March, the project reported on the millions of dollars donated by the fossil fuel industry in recent years to BC political parties. This research is supported by the Social Science and Humanities Research Council of Canada (SSHRC).

Shannon Daub is the Associate Director of the Canadian Centre for Policy Alternatives BC Office and co-director of the Corporate Mapping Project. Her research interests include social movements, framing, environmental communication, and democratic capacity.

Zoë Yunker is a graduate student in the Sociology Department at the University of Victoria and a research assistant with the Corporate Mapping Project. Her current research areas include regimes of dispossession, settler solidarity with Indigenous movements and carbon capital’s influence on policy development. Zoë co-founded the BC-Wide LNG network, a group that convenes organizations resisting LNG development, and she volunteers with the frontline solidarity group— the Sacred Fire Network.