Boom, Bust, and Consolidation: Corporate Restructuring in the Alberta Oil Sands
Featured, Reports & Studies
by Ian Hussey, Eric Pineault, Emma Jackson and Susan Cake | November 7, 2018
Sign up for the latest news and updates on corporate power at the climate crossroads.

This report analyzes the economics of the five largest bitumen extractive corporations in Canada. The “Big Five” are Suncor Energy, Canadian Natural Resources Limited (CNRL), Cenovus Energy, Imperial Oil, and Husky Energy. The report examines the key features of the five firms and analyze their accumulation dynamics in the context of the latest commodity cycle: boom (2004–2014), bust (2014–2016), and restructuring and consolidation (2015 onward). 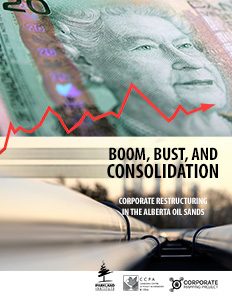 In 2017, the Big Five returned $4.16 billion to their shareholders in the form of dividends, or 30.3% of their net profits, which is considerable. The Big Five spent another $2.04 billion of their income buying back shares from the market, meaning that the total transfer of value to shareholders in 2017 was $6.2 billion. In comparison, the Big Five paid $1.6 billion in income taxes and $3.12 billion in royalties to various levels of government (chiefly Alberta), meaning the total transfer of value to various governments in 2017 was $4.72 billion. The residual once all these payments and transfers are made are retained as savings—uncommitted capital that can be eventually invested. The Big Five’s 2017 residual savings were $7.3 billion.

The report shows that over the latest commodity cycle the Big Five were able to maintain their gross profits, out of which they pay for past investments, maintain overhead expenditures, and generate financial capital in the form of share buybacks and dividends. The Big Five were able to do this through direct production cost compression. With the Big Five increasing production while squeezing costs and slowing down investment, a significant chunk of Alberta’s (and Canada’s) carbon budget is currently reserved for a slow-growing, cost-cutting sector with weak fiscal, investment, employment, and innovation benefits.

If the Big Five are able to continue to steer provincial and federal fiscal, energy, and climate policies, Canada will not be able to live up to its Paris Agreement obligations for the year 2050. What is more, humanity likely doesn’t have three decades to dramatically reduce fossil fuel use. Despite this reality, the Big Five all forecast an increase in total emissions in the future due to their plans to increase bitumen production. None of the Big Five have made science-based targets or implemented material actions that align with the amount of decarbonization required to keep the global average temperature increase below 2C, let alone 1.5C.

Eric Pineault is a professor at the University of Québec in Montréal, where he teaches political economy in the Department of Sociology and ecological economics in the Environmental Sciences Institute. His current research focuses on the political economy of the ecological transition in Canada and of the extractive sector in Canada and globally. He has recently published Le piège Énergie Est with Écosociété, a book that critically examines the Energy East pipeline project. Eric is a core team member of the Corporate Mapping Project.

Emma Jackson is a settler on Treaty 6 land, where she is an MA candidate in the Department of Sociology at the University of Alberta. Her research interests include feminist political economy, transnational migration, and geographies of resource extraction. Emma has a degree in geography from Mount Allison University, and over four years’ experience as a student organizer with the Canadian fossil fuel divestment movement. She is also a research assistant at Parkland Institute for the SSHRCC-funded Corporate Mapping Project.

Susan Cake completed her masters in sociology at York University before moving to the University of Alberta to pursue her PhD in sociology, where her research focuses on unions’ communication structures and union renewal. Susan has also trained in strategic corporate research at Cornell University. Susan is currently the director of policy analysis for the Alberta Federation of Labour, where she focuses on occupational health and safety, workers’ compensation boards, and pensions, among other worker-focused issues.