Has Alberta’s new royalty framework achieved its aims?
Commentary
by Ricardo Acuña | January 30, 2017
Jeff Wallace / Flickr
Sign up for the latest news and updates on corporate power at the climate crossroads.

It has now been a full year since the Alberta government announced its new royalty framework for oil and gas. The announcement, delivered with significant fanfare on January 29, 2016, and accompanied by numerous statements of support from the oil and gas industry, essentially boiled down to the statement that Alberta was already receiving its fair share of oil and gas revenues, and that only minimal changes were needed moving forward.

Those minimal changes, according to the news release issued by the government on the occasion, would mostly impact the calculation and collection of royalties for conventional oil and gas, but also included commitments to improve transparency and accountability in the reporting of how all royalties are calculated and collected, and increased value-added processing of our resources.

The results of these changes, according to the government, would include increased certainty and competitiveness for industry, increased investment, maintenance of returns to the province in the short term, and increased revenues to the province over time.

The reaction to the announcement from much of the government’s traditional base on the left was one of surprise and betrayal, focusing on the long-standing New Democrat position that royalties in Alberta were too low. There is also the question of why a government ostensibly committed to reducing greenhouse gas emissions would implement a royalty framework designed to increase investment and encourage growth in fossil fuel extraction.

In the months following the announcement of the new framework, the government set out to establish the actual rates, formulas, and guidelines for conventional oil and gas royalties, and proceeded to make them public in July (with other programs and key figures being released in November). All of these, along with royalty calculators and industry information, are available on Alberta Energy’s royalty website for anyone who is interested to peruse.

The level of detail provided by Alberta Energy on their website about all aspects of the royalty framework, and the fact that Alberta Energy has been mandated to develop a series of performance metrics that will be used to determine if the new royalty framework is actually meeting its stated objectives, suggests the government is serious about increased transparency and accountability.
Of course, regardless of how good and effective those performance metrics turn out to be, we will not able to ascertain for some time exactly what the impacts of the new royalty framework will be on investment, government revenues, or the environment, but a recent report co-authored by economist and longtime advisor to the former Alberta government Jack Mintz and Daria Crisan provides some insight into what those impacts might be.

Mintz and Crisan focus their study of “competitiveness” around the calculation of the marginal effective tax and royalty rate (METRR), a metric that takes total taxes and royalties paid by a company as a percentage of their total return. As such, the lower a jurisdictions METRR, the more competitive it is seen to be and the more attractive it is to potential investors.

According to the calculations in the report, based on oil at US $50 a barrel, the new royalty framework will result in an METRR for Alberta of 26.7%, down from 35% under the old system, making new conventional oil investment in Alberta significantly more attractive than it was. 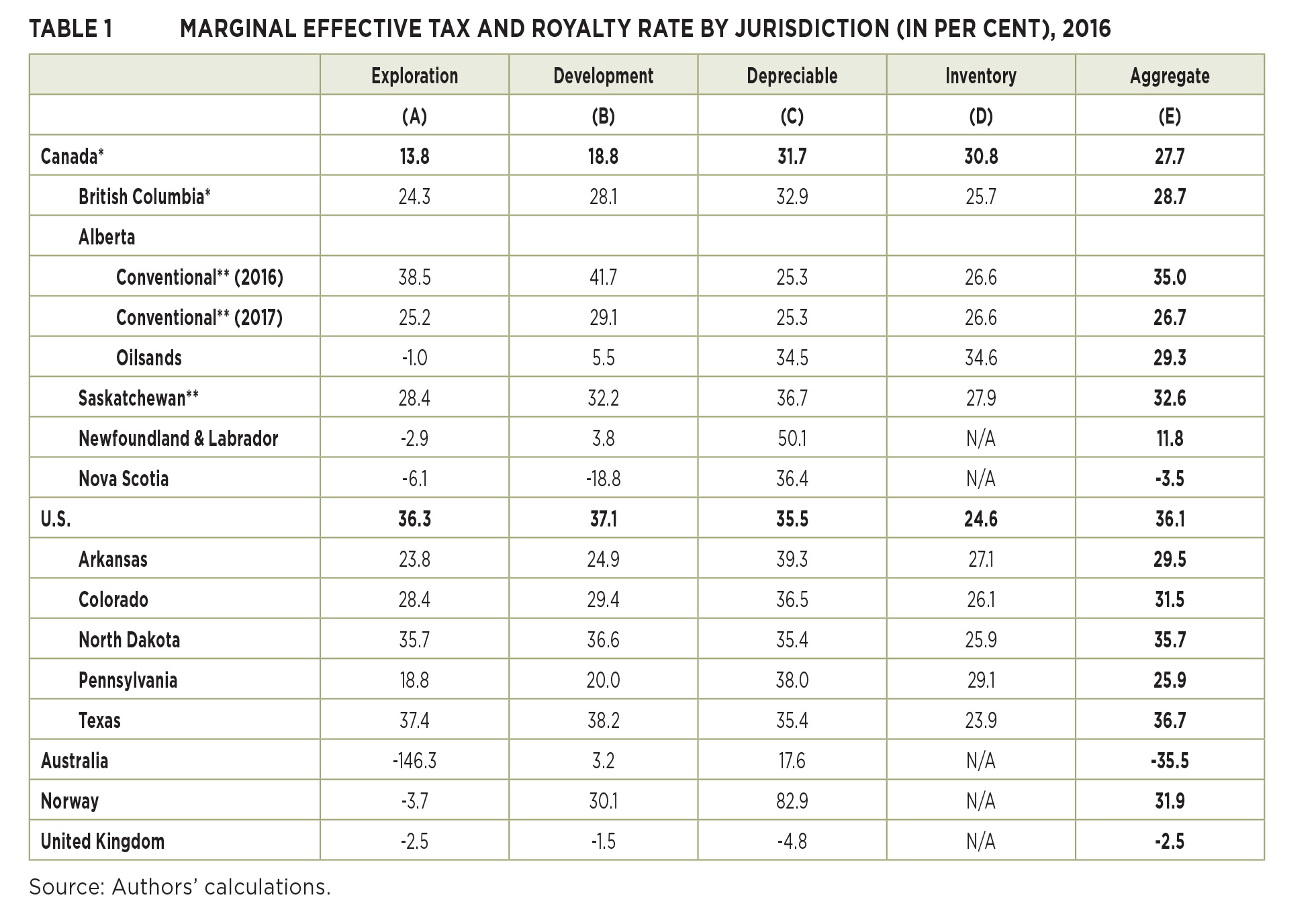 Source: Alberta’s New Royalty Regime is a Step Towards Competitiveness: A 2016 Update

In fact, as the table above shows, this makes Alberta even more competitive and attractive for conventional oil investment than either of its neighbours to the east and west, and better than competing jurisdictions like North Dakota and Texas. The report further points out that the new royalty framework is more than enough to make up for the Alberta government’s increase of corporate income tax from 10% to 12%. “The Alberta corporate tax rate increase from 10 to 12 per cent in 2015 raised the METRR from 34.3 to 35 per cent for conventional oil, while the new royalty reduces it to 26.7 per cent” says the report (page 8, footnote 27).

Alberta’s competitiveness rating, according to the report, went from being somewhere in the middle of the pack, to being one of the best. Of the regimes included in the study, only Australia, the UK, Pennsylvania, Nova Scotia, and Newfoundland & Labrador fare better. The price sensitive nature of Alberta’s royalties means a higher METRR if we imagine oil at US$70, but it is still comparable to or better than most other jurisdictions even at that price.

Ultimately, the report concludes that the new royalty regime is far more competitive than the old one and than those in competing jurisdictions. As such, they fully expect that the new framework will contribute to new investment and growth in conventional oil, achieving one of the key goals set out by the new royalty framework.

It is also important to point out that, when setting the new framework for conventional oil and gas, Alberta Energy set the rates in such a way that the amount of revenue coming into provincial government coffers by way of conventional oil and gas royalties will remain the same as would have come in under the old framework. This is primarily because the new framework eliminates the many distortions, incentives, special programs, and volume-based calculations that often resulted in conventional oil wells paying nothing in royalties in a low-price environment.

The government claimed when they released the new framework last year that by increasing competitiveness, encouraging cost-effective oil production, and protecting the current level of revenues, royalty revenues would increase over time. Of course, there is no way to know this until the system has been in place for at least a year, but early indicators are that the government has succeeded on all these fronts.

What is not yet clear, however, is what the impact of increased investment and production will be on Alberta’s climate change goals, and on Alberta’s economic stability over time. In designing a framework that encourages growth and investment in fossil fuels, has the government actually made us more dependent on the oil and gas industry when it originally campaigned on moving us in the opposite direction? And how do we rationalize promoting growth in the fossil fuel sector when the government has committed to reducing our greenhouse gas emissions over time?

Ultimately, the government appears to have achieved exactly what it set out to achieve with its new royalty framework. It is important to keep in mind, however, that those goals were predominantly about meeting the needs of the industry rather than significantly increasing Albertans’ total take from our oil and gas resources or the long-term sustainability and stability of our economy, our government revenues, or our environment. This speaks volumes about the ongoing political power of the oil and gas industry in Alberta, even in the face of an ostensibly centre-left government, and of the need for a broad-based concerted push by Albertans if they would like to see the public interest prevail over the private interest on these issues.

Ricardo Acuña is the Executive Director of the Parkland Institute, Faculty of Arts at the University of Alberta – a position he has held since 2002. Previous to that he worked for nine years as Projects Coordinator for Change for Children Association, an Alberta-based international development organization working in Latin America. He has a degree in Political Science and History from the University of Alberta, and has over 20 years experience as a volunteer, staffer and consultant for various non-government and non-profit organizations around the province. He has spoken extensively and written on energy policy, democracy, privatization, and the Alberta economy. He is a regular media commentator on public policy issues, and writes a regular column for Vue Weekly in Edmonton.