Governments should support oil sands workers, not companies
Commentary, Featured
by Ian Hussey | March 24, 2020
Sign up for the latest news and updates on corporate power at the climate crossroads.

About two weeks ago, my new Corporate Mapping Project report on the future of Alberta’s oil sands industry was published. The report analyzes how the oil sands industry, in the early years of the mature phase of its business life cycle, is producing more bitumen with less capital and fewer jobs.

The figure below, produced by earth scientist David Hughes, is copied from the report. 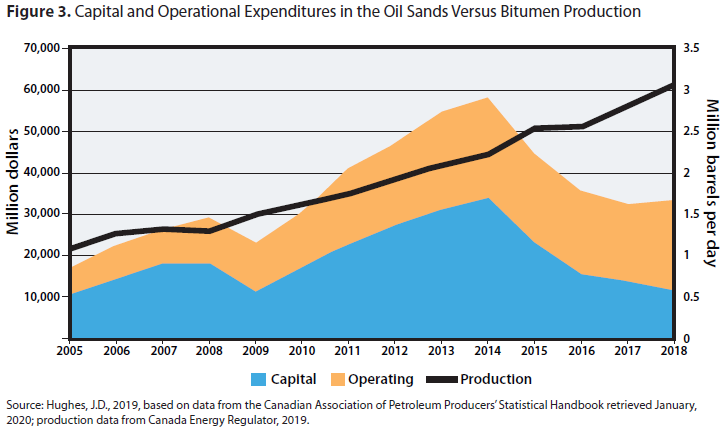 In the last decade, advancements in extractive technologies and modular facility design have enabled leading oil sands producers to increase production with less capital and fewer jobs. These ongoing trends were accelerated by oil sands companies after the 2014 oil price crash. The result is, since 2014, oil sands production has increased 23%, while jobs have declined by 23% and capital spending is down about 65%.

In other words, productivity per employee in the oil sands has increased significantly. 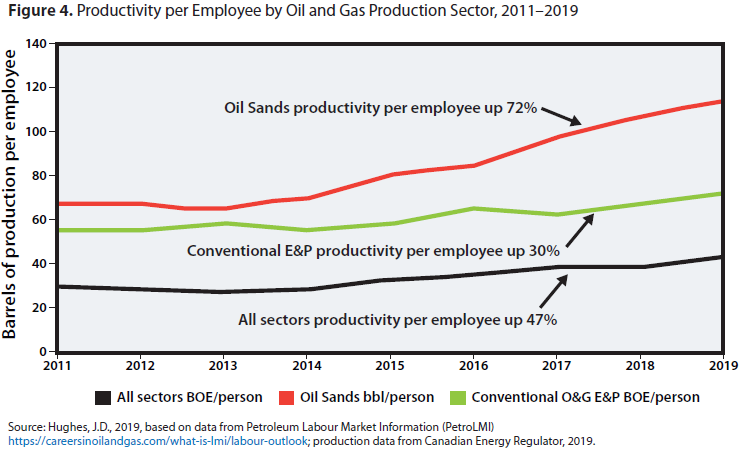 In the two weeks since my report was released, oil prices have decreased dramatically. While COVID-19 is dampening global demand for oil in the short-term, the larger threat to the Canadian oil industry since 2014 stems from the fact that the world is awash in oil. The ongoing supply overhang is now being exacerbated by a price war between the Saudis and the Russians.

This suggests that most of the 53,000 Canadian oil and gas jobs that have been cut since 2014 are likely not coming back.

Even before the recent price war began and public health measures were implemented to slow the spread of COVID-19, employment and capital spending in the Canadian oil and gas industry seemed unlikely to return to the heights seen in 2014.

Taking into account the long-term capital spending, employment, and technology trends highlighted in my report, it does not make sense for the federal government to consider buying shares in Canadian oil and gas companies, as Premier Jason Kenney has suggested.

Carlene Variyan, communications director for federal Natural Resources Minister Seamus O’Regan told The Globe and Mail last Thursday that, “We know that the oil and gas sector has been particularly affected, and specific help is needed. We’re looking at all options—including helping maintain jobs in the industry by enabling workers to put their skills to use remediating the environmental liabilities associated with orphan wells.”

Supporting laid off workers to do useful things like clean up the oil and gas industry’s orphan wells makes some sense. It will rightfully irk some taxpayers to shoulder part of that bill given orphan wells have always been and still are an industry responsibility.

The bigger question coming out of the current crisis is how Alberta and Canada will transition away from oil and gas over the coming two or three decades.

In the short-term, the focus of the Alberta and Canadian governments should be direct support for workers and their families so they can continue to pay rent and mortgages, as well as purchase food, clothing, and other basic necessities in the face of the pandemic.

In the medium-term, the need to rebuild the Alberta and Canadian economies post-pandemic provides an opportunity to build something new that better aligns with the federal government’s mid-century target of having a net-zero emissions economy.

The bigger question coming out of the current crisis is how Alberta and Canada will transition away from oil and gas over the coming two or three decades.

In that regard, the Alberta and Canadian governments should consider possible investment opportunities outside of oil and gas that will provide employment for laid off workers and move our province and country toward a more economically and environmentally sustainable future.

Renewable energy is another sector that fits into Alberta’s and Canada’s long-term needs. Prior to its cancellation in 2019 by the United Conservative Party, Alberta’s Renewable Energy Program (REP) ran three competitive auctions that set record low prices for new renewable electricity capacity in the province. It is still early in the energy transition process, and restarting the REP would be a cost-effective way for Alberta to ramp up renewable generating capacity in the coming years.

Alberta, Canada, and countries around the world are in transition and we must start seriously planning for a different kind of economy.