Turn off the taps? Alberta already has Vancouver over a barrel
Commentary, Featured
by Marc Lee | April 29, 2019
Sign up for the latest news and updates on corporate power at the climate crossroads.

Drivers in Metro Vancouver are reeling from record high gas prices, and many commentators are blaming taxes. Now, Alberta’s Premier-elect Jason Kenney is threatening to “turn off the taps” to push prices even higher because, it is alleged, BC is causing them to lose billions of dollars in oil revenues by opposing the Trans Mountain Pipeline Expansion.

But there’s something important missing from this conversation: Alberta’s oil industry is already making huge excess profits at the expense of Vancouver drivers. It’s not taxes causing current pain at the pump, but industry gouging.

Let’s roll back the clock a few years. In April 2016, gas prices in Vancouver were $1.15 per litre compared to today’s prices of over $1.70 per litre. That’s a 55 cent per litre increase in a few short years.

The other 49 cents of the 55 cent per litre price increase is from non-tax (or market) factors, which include the price of crude oil, the margin (or mark-up) taken by refineries, and the margin taken by gas retailers (all data available here). 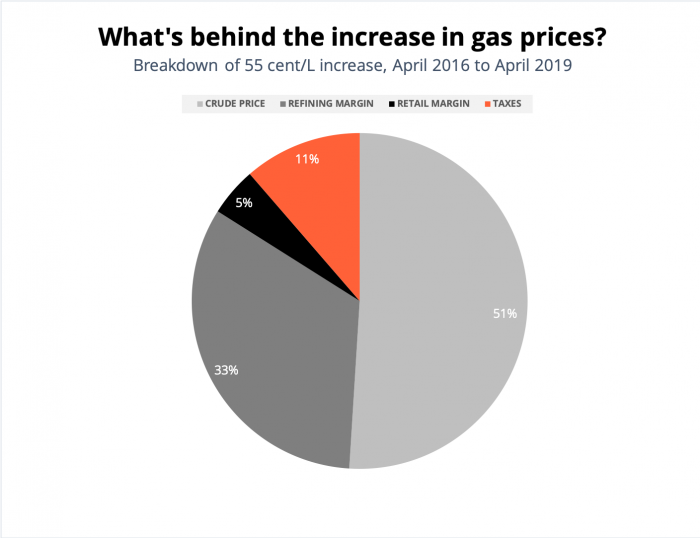 The price of crude oil embedded in gas prices is responsible for just over 28 cents of the total price increase. This price hike hits drivers in Calgary the same as in Vancouver, but it is pure profit for oil producers, whose production costs have not changed.

That Alberta crude oil must be processed by refineries into transportation fuels like gasoline and diesel. The existing Trans Mountain pipeline transports crude to the Parkland refinery in Burnaby, and it also transports refined product from three Edmonton refineries owned by Shell, Imperial and Suncor.

Since April 2016 more than 18 cents of the higher per-litre cost of gas comes from increased refining margins. That’s triple the amount from tax increases over the same period.

Another way of looking at this exercise of market power is to look at other cities. Recent data show that refining margins in Toronto and Calgary have ranged from 18 to 32 cents per litre in recent weeks.

But the refining margin for Vancouver gas was almost 55 cents in mid-April, an amount much higher than historical terms. A decade ago, Vancouver refining margins were under 20 cents per litre.

A final but small contributor to higher prices is the margin taken by retailers (gas stations), up 2.6 cents per litre since 2016. These retailers are often extensions of the same companies doing the refining, through outright ownership or through long-term supply contracts.

The market power of refineries is the most notable factor in Vancouver’s sky-high gas prices. Pretty much any excuse like routine maintenance or bad weather leads immediately to higher prices at the pump.

Companies are charging higher prices because they can get away with it. Gouging behaviour began in earnest when crude oil prices fell 68% between the first quarters of 2014 and 2016. The full price at the pump dropped only 18%, however, as refiners stepped in to take greater profits.

The Burnaby refinery is a case in point. Calgary-based Parkland Fuel corporation bought the refinery from Chevron in October 2017. Their most recent annual report shows the company boosted its profits by $400 million in 2018 thanks to the refinery.

The bottom line: Vancouver drivers are paying 20–30 cents more per litre to refiners. This translates into an extra $500–750 million per year flowing from Vancouver drivers to Big Oil for gasoline (not including diesel).

A study by Navius Research in 2018 estimated that excess profits to refiners cost consumers $2.4 billion between 2015 and 2017 for both gasoline and diesel.

In this sense, Premier-elect Kenney’s threat to turn off the taps is just political theatre. Doing so would eat into the excess profits being made by Alberta-based companies.

BC’s next move should be to regulate gas prices to put a lid on gouging behaviour. We could take a page from the Maritime provinces, all of whom regulate the maximum price of gasoline at the pump. April gas prices excluding taxes in Halifax were about 30 cents per litre cheaper than Vancouver.

The BC Utilities Commission already regulates electricity and natural gas prices in BC. Its mandate should be extended to gasoline and diesel. Even the synchronized weekly up- and down-swings of gas prices in Metro Vancouver could be tamed by a more regulated market.

Some politicians have suggested BC cut its fuel and carbon taxes to alleviate pain at the pump. But if we were to cut taxes, this would only reward the egregious profiteering of Big Oil. It would amount to a transfer of income from the public sector to the oil industry.

In the short term it’s worth considering some relief for low-income households. With the high cost of housing, more people are forced out of the central city to car-dependent areas. A good model is BC’s low-income carbon credit funded out of the carbon tax. Increasing this amount would directly benefit low-income households. In addition, new funding should be allocated to expand public transit to improve mobility and decrease car dependency.

There is no supply shortage of gasoline in Metro Vancouver. No vehicles have been turned away from a station because they ran out of gas. The demand for gasoline in Vancouver is very stable and predictable, and storage tanks exist to manage inventories of fuel.

It shouldn’t be too difficult for these companies to supply fuel at comparable prices to other parts of Canada, as they have historically. And if they won’t, the BC government should step in to regulate the market.

Marc Lee is a Senior Economist at the CCPA’s BC Office and a co-investigator with the Corporate Mapping Project (CMP).

In addition to tracking federal and provincial budgets and economic trends, Marc has published on a range of topics from poverty and inequality to globalization and international trade to public services and regulation. Marc is Co-Director of the Climate Justice Project, a research partnership with UBC’s School of Community and Regional Planning that examines the links between climate change policies and social justice.