Why now is the time to reform the royalty regime in BC
Commentary, Featured
by Marc Lee and Seth Klein | December 8, 2020
Sign up for the latest news and updates on corporate power at the climate crossroads.

The oil and gas royalty regime in British Columbia needs a major overhaul.

The re-elected NDP promised during the election campaign to review oil and gas royalties and credits. In the context of a climate emergency the need for a managed wind-down is urgent. Despite “natural” gas being a finite greenhouse-gas-generating fossil fuel, the royalty regime BC applies for the extraction of natural gas is aimed at encouraging and ramping up production, not winding the industry down.

A central public policy objective should be to maximize the returns to the public from the extraction of this collectively owned resource, while reducing subsidies that incentivize production on more marginal sites.

Royalties differ from, say, corporate income taxes, in that they reflect a return to the Treasury when private development of a public resource takes place. There are two components to gas royalties in BC. First, companies bid in auctions for land tenure rights for exploration, and second, they pay a royalty on actual production. Together, the royalty regime is supposed to capture a fair share of the economic rent or profits from the private exploitation of a public resource. If only.

Over a decade ago, BC received large annual royalty revenues from its growing natural gas sector. This is no longer the case. Total BC gas production has increased substantially in recent years (top green line, right axis), up about 84% in 2019 compared to 2007. Public revenues, on the other hand, have fallen substantially. Considering both royalties paid on gas production and leases of Crown land, returns to the public hit a record $3.7 billion in 2008/2009 (see bars) compared to an average of $150 million per year since 2015/16. 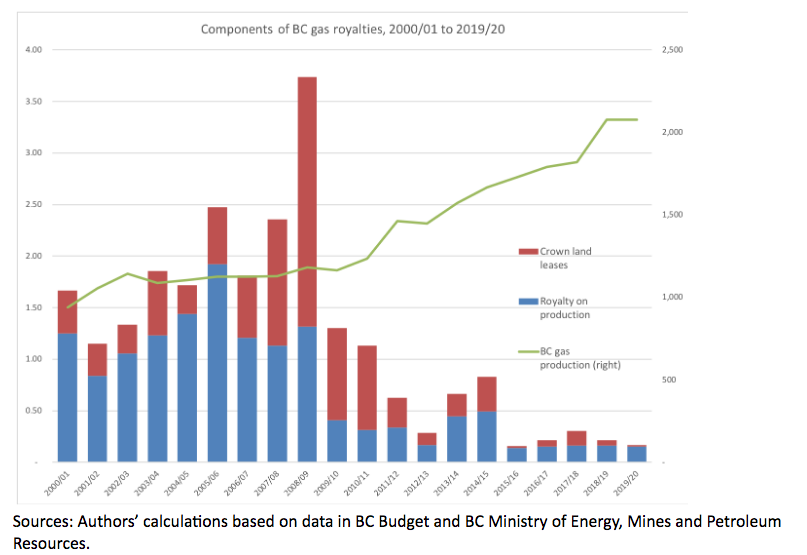 BC’s royalty regime is primarily based on the price of gas rather than the volume produced. Low market prices in recent years have been a critical factor behind lower royalty revenues. From a peak of $8-9 per thousand cubic feet in 2008 gas prices dropped well below $2 in 2016 and 2017 in BC’s principal export market, Alberta.

A second part of the decline is the expanded use of subsidies/incentives in the form of royalty credits introduced primarily to encourage fracking. BC Budget 2020 estimates these credits at $381 million in 2019/20, consuming some 71% of gross gas royalties. Use of royalty credits is forecast to grow to almost half a billion dollars by 2022/23. Credits can be stockpiled to be claimed against future royalties owing. Freedom of information requests made by CCPA’s Ben Parfitt revealed that some 26 companies garnered just over $700 million in deep well credits in 2017/18 alone. The BC Public Accounts cites outstanding deep well credits of $2.6 billion as of the end of the 2018/19 fiscal year.

Royalty reform is clearly needed to ensure public benefits and reduce incentives for companies to tap marginal wells or those with high environmental costs. In light of current low gas prices across North America and worldwide, BC is effectively subsidizing production that would not otherwise occur. This increased supply puts further downward pressure on gas prices, and royalties back to the public are a pittance relative to record volumes extracted. We are basically giving away a finite resource.

Key directions for reform include:

Marc Lee is a Senior Economist at the CCPA’s BC Office and a co-investigator with the Corporate Mapping Project (CMP). Marc is Co-Director of the Climate Justice Project, a research partnership with UBC’s School of Community and Regional Planning that examines the links between climate change policies and social justice.

Seth Klein is a research associate with and the former Director of the Canadian Centre for Policy Alternatives, BC Office. His research deals primarily with welfare policy, poverty, inequality and economic security. A social activist for over 30 years and a former teacher, Seth holds a BA in international relations, a BEd from the University of Toronto and an MA in political science from Simon Fraser University.