Who owns Canada’s fossil-fuel sector? Mapping the network of ownership and control
Featured, Reports & Studies
by William K. Carroll and M. Jouke Huijzer | October 18, 2018
Photo: © Garth Lenz
Sign up for the latest news and updates on corporate power at the climate crossroads.

This study shows that substantial ownership and strategic control over Canada’s fossil-fuel sector are in the hands of a few major players, including all the Canadian big banks and several US investment funds, governments and some wealthy families—many of which are located outside Canada. 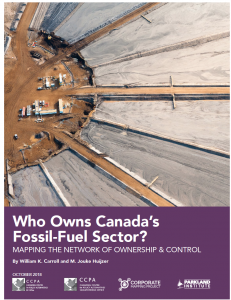 And, these investors have high stakes in maintaining business as usual rather than addressing the industry’s serious climate issues. They have both an interest in the continued growth of the sector and the economic power to shape its future.

The study highlights the important role of banks and institutional investors despite the relatively small ownership stakes any given investor tends to hold in a single fossil fuel company. Each institutional investor may own less than 10 per cent of any single company, but as a group they own far more, placing them in a position to exert control as a “constellation of interests”.

Analyzing shareholder and revenue data from recent years, the authors found that ownership of the sector is highly concentrated with the top 25 owners together accounting for more than 40 per cent of total fossil fuel industry revenues during the six-year period studied from 2010 to 2015.

William K. Carroll is Professor of Sociology at the University of Victoria and Co-Director of the Corporate Mapping Project, a research and public engagement project investigating the power of the fossil fuel industry in western Canada.

M. Jouke Huijzer worked as a research assistant for the Corporate Mapping Project at the University of Victoria in fall 2015. Currently he is pursuing a PhD. at the Vrije Universiteit Brussel.